Vietnam capital: A civilized modern city to visit with your beloved

Vietnam capital city, Hanoi, is a vibrant and lively city despite its age and history. Its charm is present in every street, building, and the local lifestyle. If you learn about the heroic past of the city, you will have a deep respect for Vietnam’s history and culture. 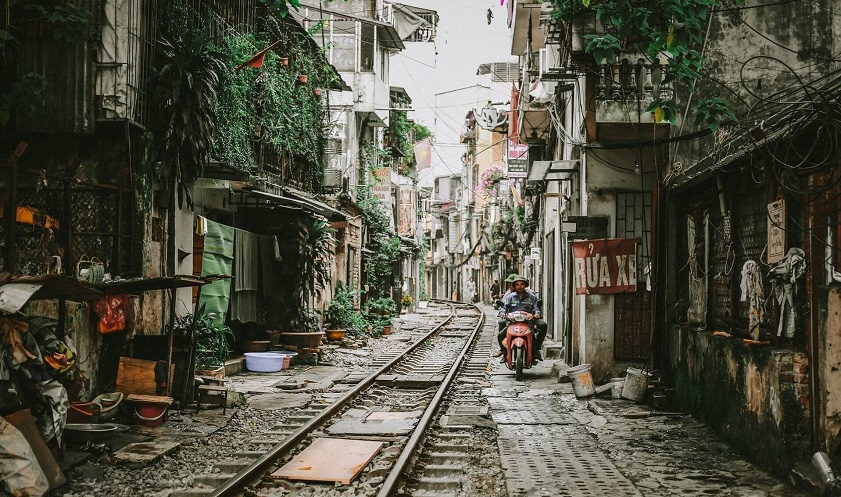 Vietnam capital is one of the most thriving cities in the country (Source: Collected)

There are countless activities to keep you occupied in Vietnam capital, such as visiting historical sites, enjoying delicious food, indulging in arts and cultural performances. During your Vietnam travel journey, you will experience the strangely endearing and long-lasting beauty of this city.

Located in Northern Vietnam, on the banks of the Red River, Hanoi is the capital of Vietnam. It has maintained its timeless charm over a thousand years. With an area of ​​more than 3,300 square kilometers, Hanoi is the largest city in the country.

Vietnam capital used to have many different names. Its current name is Hanoi, which began to be used in 1831. “Hanoi” means “surrounded by rivers”. It reflects the geographical location of the city at that time, which lay between two rivers, namely Nhi River in the northeast and Thanh Quyet River in the southwest. 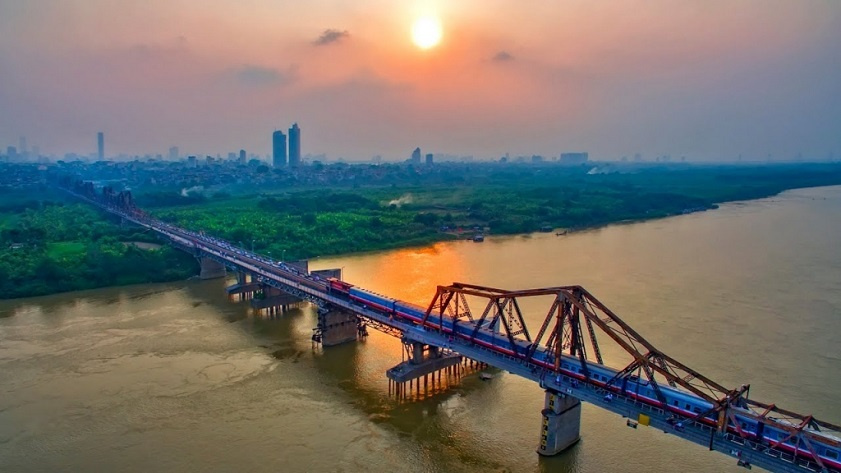 Vietnam capital has a prime location in the Red River region (Source: Collected)

Hanoi has been a political, economic, and cultural center since the very beginning of Vietnamese history. As Vietnam capital, Hanoi is home to many important cultural and entertainment sites of the country, and is also the venue for countless political and international sports events. Additionally, it is where many traditional craft villages are concentrated, and a city with lots of festivals in Northern Vietnam.

Hanoi is especially known for its nostalgic atmosphere, which can be clearly felt in the Old Quarter and its narrow winding alleyways. This is in contrast to Ho Chi Minh City in Southern Vietnam, a youthful and modern metropolis. Hanoi is 1,600 kilometers away from Ho Chi Minh City. Hence, after your Hanoi travel journey, you can take a direct flight from Vietnam capital airport (Noi Bai) to Ho Chi Minh City to fully discover the beauty of the country. 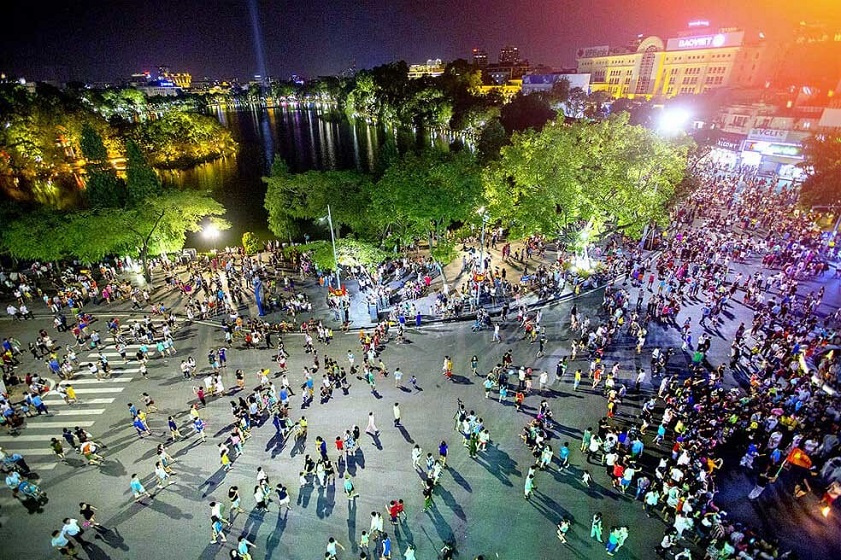 Vietnam capital is home to many important cultural and entertainment sites of the country (Source: Collected)

2. When did Hanoi become the capital of Vietnam?

King Ly Thai To, the first emperor of the Ly dynasty, established Thang Long – the imperial capital of Vietnam during the period 1009 – 1225. In 1831, Thang Long was renamed Hanoi by King Minh Mang, the second ruler of the Nguyen dynasty. After being taken over by the French in 1873, Hanoi once more rose to prominence as a major administrative hub. The city served as the administrative center of all of French Indochina in 1902.

Hanoi was held by the Japanese from 1940 until its liberation in 1945, when President Ho Chi Minh declared the country’s independence, established the Democratic Republic of Vietnam, and designated Hanoi as its capital on September 2. In 1975, when the North and South of Vietnam were reunited, Hanoi officially became the capital of the Socialist Republic of Vietnam. 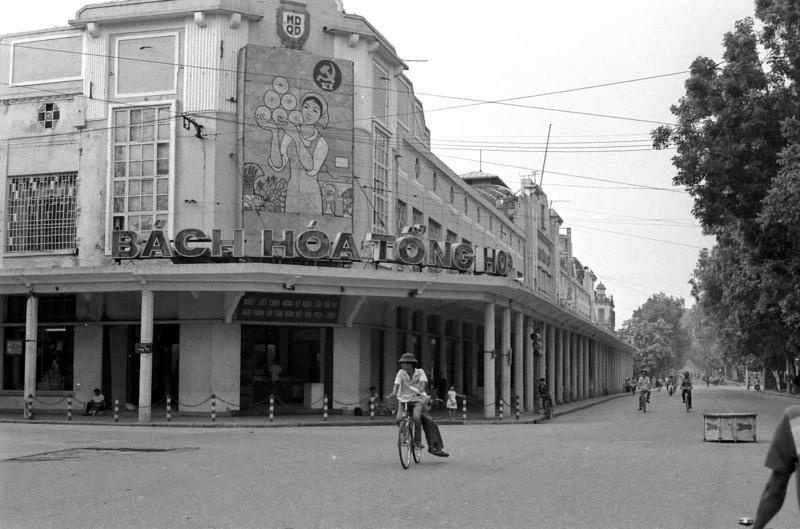 Hanoi has had various names throughout history (Source: Collected)

After the unification, Vietnam entered a period of subsidies. In 1986, the country embraced a new strategy known as the socialist-oriented market economy, which sparked fast economic growth. Since then, Vietnam capital has experienced significant changes in its infrastructure, appearance, and economic development throughout the years, making it one of Southeast Asia’s fastest-growing cities.

In 1999, Hanoi was named the “City for Peace” by UNESCO in recognition of its contributions to the cause of world peace, as well as its urban planning, conservation of the environment at large, support for culture and education, and concern for future generations. The city commemorated its one thousandth birthday in 2010, which was a fantastic occasion with wonderful festivities and fireworks. 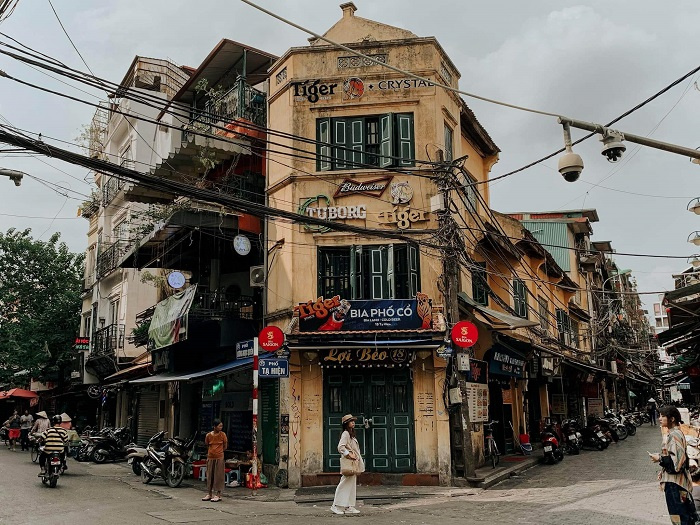 Vietnam capital was named the “City for Peace” by UNESCO in 1999 (Source: Collected)

3. All the things you need to know about Vietnam capital Hanoi

For a well-prepared trip to Hanoi, do not miss out on the useful information below to thoroughly know about Vietnam capital:

Vietnam capital is adjacent to 8 provinces: Thai Nguyen and Vinh Phuc in the North; Ha Nam and Hoa Binh in the South; Bac Giang, Bac Ninh, and Hung Yen in the East; Hoa Binh and Phu Tho in the West. It is 120 kilometers away from the port city of Hai Phong and 87 kilometers away from Nam Dinh City, which are the three major cities of the Red River Delta region.

Vietnam capital accounts for about 1% of the country’s natural area. Most of its area has an average elevation of 5 to 20 meters above sea level. The topography gets lower from North to South and from West to East, which is clearly reflected in the natural flow directions of the major rivers flowing through the city. 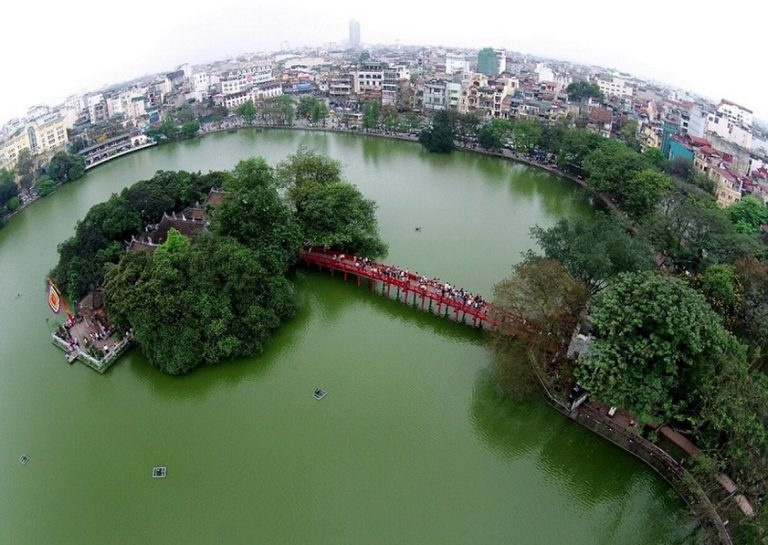 Hanoi is one of the 3 major cities in Vietnam in general and the Red River Delta region in particular (Source: Collected)

Vietnam capital has 4 distinct seasons in a year. Winter has the coldest and driest months, from November to February, with the average temperature of 10 – 15 degrees Celsius. From February to April, it is warmer and cozier. Summer, which lasts from May to August, is characterized by strong sunshine, high humidity and rainfall. From September to November (autumn), it is typically sunny and mild.

It can be said that the most pleasant months to visit Vietnam capital are from September to December or from February to April, with temperatures ranging from 18 to 28 degrees Celsius and typically dry days. 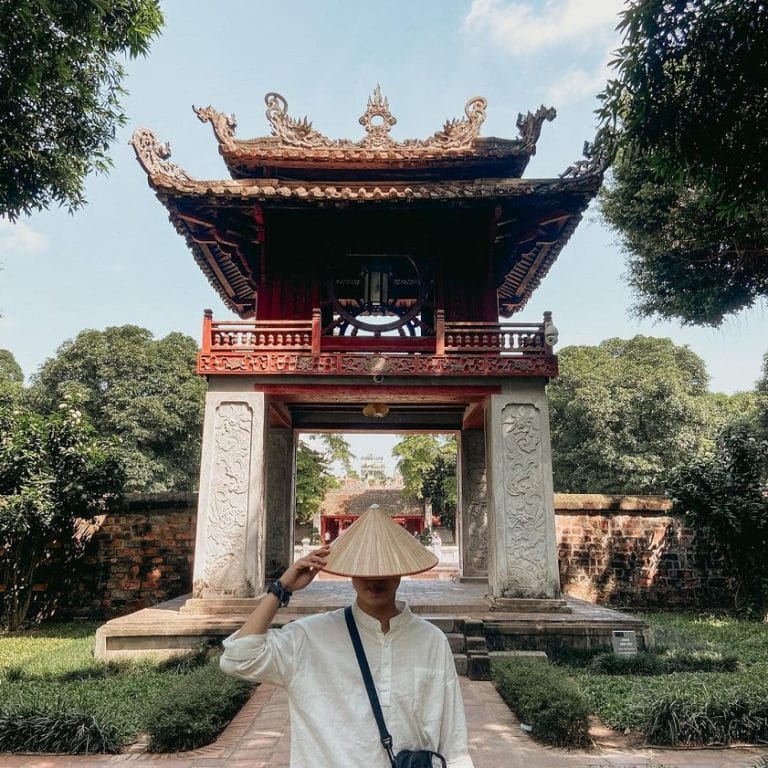 From September to December or from February to April is the best time to visit Vietnam capital (Source: Collected)

Due to the massive influx of immigrants and students from other provinces, Hanoi is currently the second most populous city in Vietnam with the population of over 8.3 million in 2021. It also has the second highest population density among the 63 provincial administrative units of Vietnam.

The people of Hanoi are yet another aspect that sets it apart. They are always eager to help you whenever you need it. You will experience the people’ friendliness, enthusiasm, and politeness when visiting Vietnam capital and interacting with them. Despite urbanization, they have still maintained their cultural traditions, values, and beliefs.

When Vietnam was in a slump many years ago, the people of Hanoi always placed a high priority on education, sending their kids to school and seizing the chance to improve Vietnam. The youth in Vietnam capital have steadily acquired knowledge, and they are becoming more educated than ever. 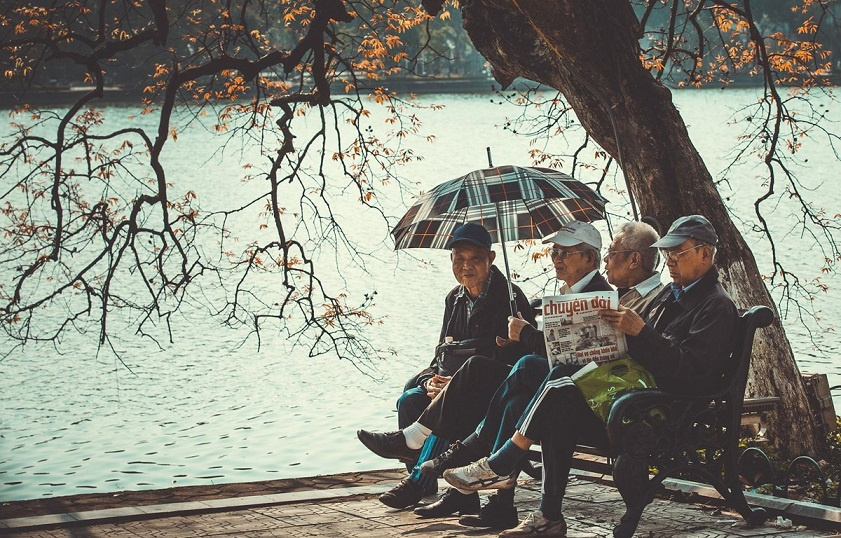 The people of Vietnam capital are friendly and hospitable (Source: Collected)

A long history and rich culture helps Vietnam capital have diverse and distinctive architecture. Nowadays, the capital is full of old houses on winding streets, or religious buildings located deep in residential areas, etc. Hanoi Old Quarter, the historic center of the city, is the most crowded area in Vietnam capital. All the houses on both sides of the streets in the Old Quarter are tube houses with narrow width, deep length and sometimes connecting to other streets. 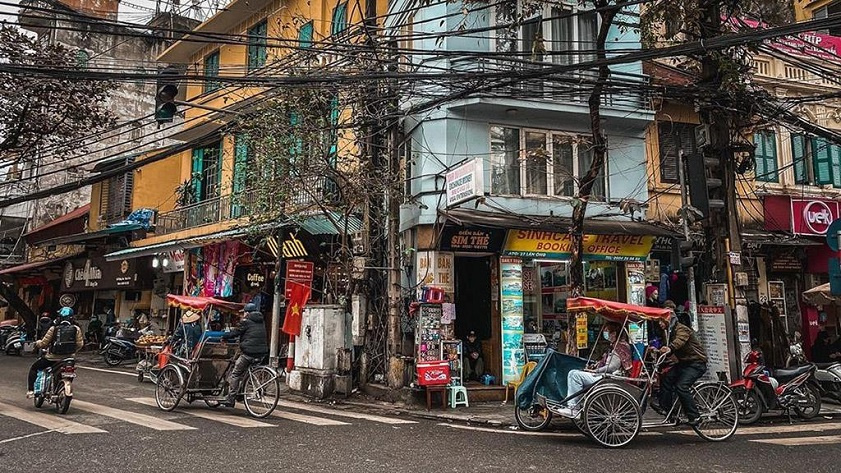 The Old Quarter is a highlight in the architecture of Vietnam capital nowadays (Source: @nguyentruc88)

Thanks to its historical sites, serene lakes, and old alleyways lined with traditional buildings, Vietnam capital draws a great number of tourists each year. Thang Long Imperial Citadel and Ho Chi Minh Mausoleum are two well-known historical monuments where you can learn about the country’s valiant past. Additionally, there are many other landmarks for you to explore, such as Hoan Kiem Lake, Presidential Palace, St. Joseph’s Cathedral, Long Bien Bridge, Bat Trang Pottery Village, etc.

If you are looking for a more modern and indoor entertainment site, VinKE at Vincom Mega Mall Times City is a terrific spot to visit, especially for a family outing. Here, you and your children can participate in a variety of fun activities. And don’t forget to stop by the neighboring Vinpearl Aquarium, one of Vietnam’s most advanced aquariums, to see the splendor of marine life. 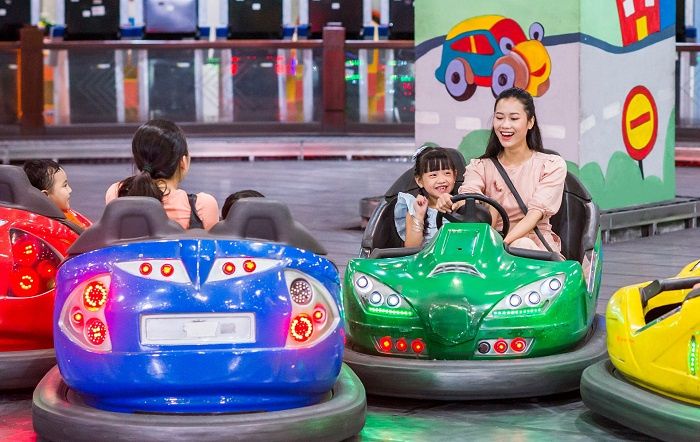 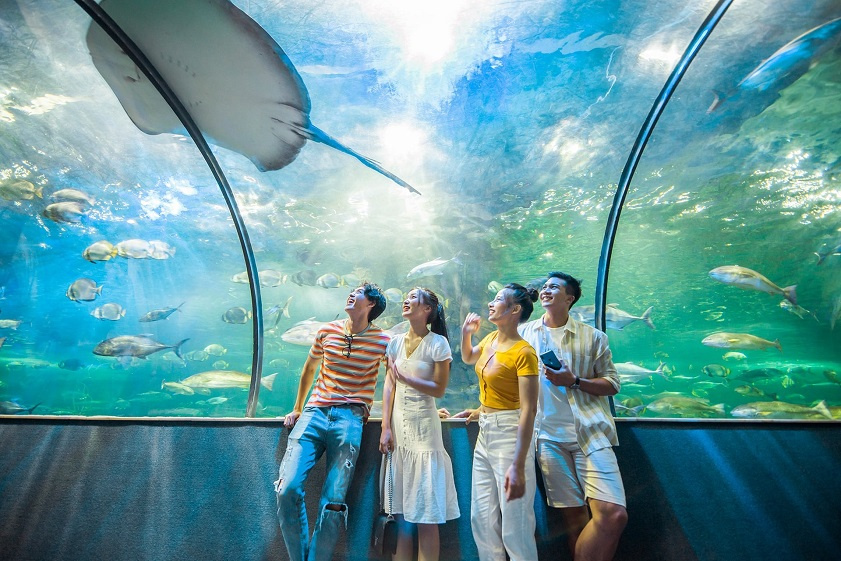 >>> Book tickets of Vinpearl Aquarium and VinKE to get more excitement on your trip to Vietnam capital!

As a city with more than 1,000 years of history, it can be said that Vietnam capital has the cultural quintessence of Northern Vietnam in particular and the whole country in general. It has a significant impact on the morale of its inhabitants, giving rise to the local culture with a wealth of folklore, folk songs, proverbs, legends, and festivals.

For a thousand years, this city has been a gathering place for elite figures, merchants, artisans, and skilled craftsmen. They came here to settle down, bringing with them their local customs and practices. The cultural charm of Hanoi is best demonstrated by the elegant demeanor of the local residents. In addition, Hanoi’s cuisine is in a class of its own, as the locals hold their meals to extremely high standards. They prepare meals according to the seasons and rely on creative combinations of ingredients to satisfy their cravings for good food. You cannot afford to miss any of Hanoi’s delicacies, such as Pho, rice vermicelli soup, La Vong fish cake, rice noodles with fried tofu and fermented shrimp paste, etc. During your trip to Vietnam, besides Vietnam capital which is a must-visit destination in Northern Vietnam, there are a lot of other unmissable places to see in the Central and Southern regions, such as Hoi An, Da Nang, Nha Trang and Phu Quoc. As the top renowned tourist attractions of Vietnam, these destinations will amaze you with tons of fantastic experiences.

And while you are there, you have the chance to enjoy a luxurious stay at the system of Vinpearl hotels and resorts – which is a top-rated accommodation brand in Vietnam – with prime locations and all-inclusive services. In addition, it is worth mentioning the world-class entertainment system VinWonders, which has beautiful landscapes and countless attractive activities. They will surely bring you endless fresh experiences during your trip to Vietnam. 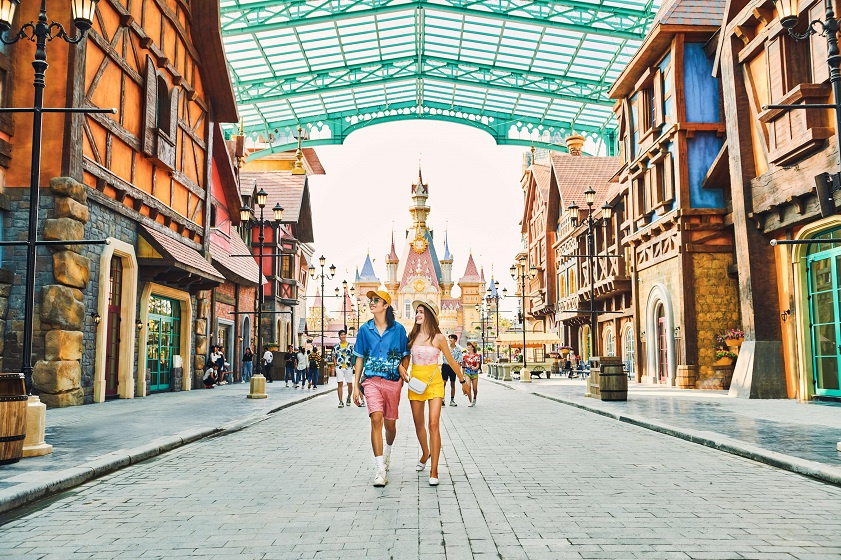 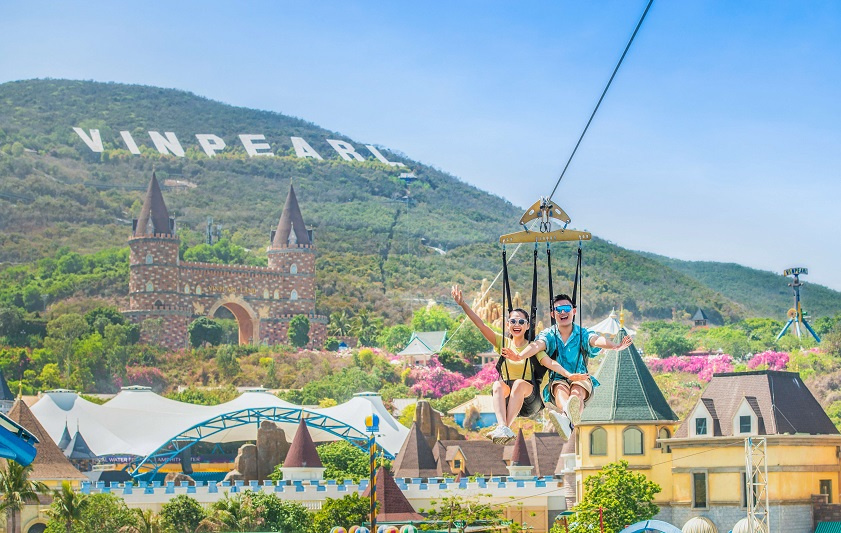 In addition to Vietnam capital, you can plan a trip to other interesting destinations throughout the country

To enjoy the trip to Vietnam capital, you can simply take in the atmosphere by strolling the streets, observing the locals, and striking up conversations with them. And it would be a waste to leave without seeing some of the city’s most well-known attractions and learning about its somewhat stormy past. Therefore, plan carefully to have the best trip to Vietnam capital – Hanoi – and many other destinations in the country as well.

>>> For a budget-friendly trip, do not forget to book voucher, combo, tour to Phu Quoc, Nha Trang, Hoi An, Da Nang!

Hanoi travel: An EXCELLENT choice for any backpacker to Vietnam in 2022

Hanoi train street: A UNIQUE place to drop by during your trip

Hanoi things to do: TOP activities to put on your bucket list right away

Egg coffee (Ca phe trung): A drink that has the authentic taste of Vietnam