Hoi An weather: The comprehensive guide for your seasonal travel

Hoi An weather has the dry and the rainy season, both of which have many suitable activities for tourists. Learn about these seasons and their features to prepare for your upcoming trip! Hoi An ancient town has been a magnet to tourists, especially foreigners. Hoi An weather will greatly influence your journey here. Below is a thorough guide on the local seasons and tips to best enjoy your trip in different seasons. Hoi An not only has ancient houses, idyllic rural areas but also magnificent beaches and recreational centres.

1. Hoi An weather: How many seasons does it have?

Hoi An Ancient Town has the typical tropical monsoon weather of Vietnam. The average temperature is around 29 degrees Celsius. Hoi An weather has 2 distinct seasons, namely the rainy season (September – January) and the dry season (February – August) instead of 4 seasons like in the north of Vietnam.

The best time to visit Hoi An is between February and July, as the weather is mild with gentle sunshine and low humidity. Whether in the rainy or the dry season, Hoi An has its own charm and various interesting activities for visitors to try throughout the year. 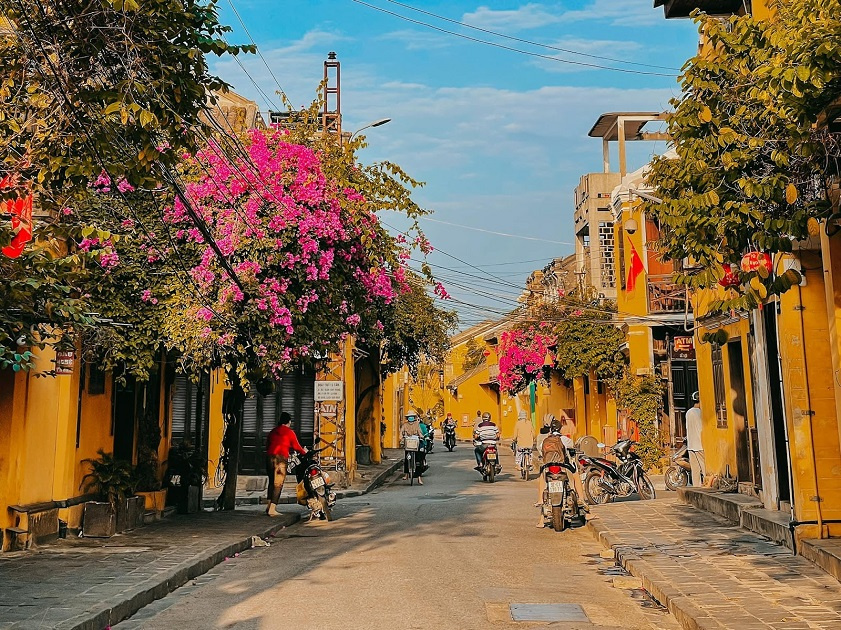 The weather in Hoi An in February is best for travelling (Source: Collected)

2. The best tips for traveling to Hoi An in the dry season

With 400 years of history, Japanese Bridge Hoi An is a beautiful historical work, a harmonisation of the culture and architecture of Vietnam and Japan. According to legend, this work was like a sword that pierced the back of a monster, preventing it from wagging its tail and causing earthquakes. The bridge has been recognised as a National Historical and Cultural Relic of Vietnam. It also appears on the VND 20,000 banknote of Vietnamese money. During the best time to travel to Hoi An Vietnam, you should visit Japanese Bridge (Source: Collected)

The construction of My Son Sanctuary was started in the 4th century and completed in the early 14th century. This is a complex of 1,158 hectares with more than 70 temples and towers with unique architecture, representing the many historical periods of the Champa kingdom. The complex was also built to worship Shiva, a Hindu god. 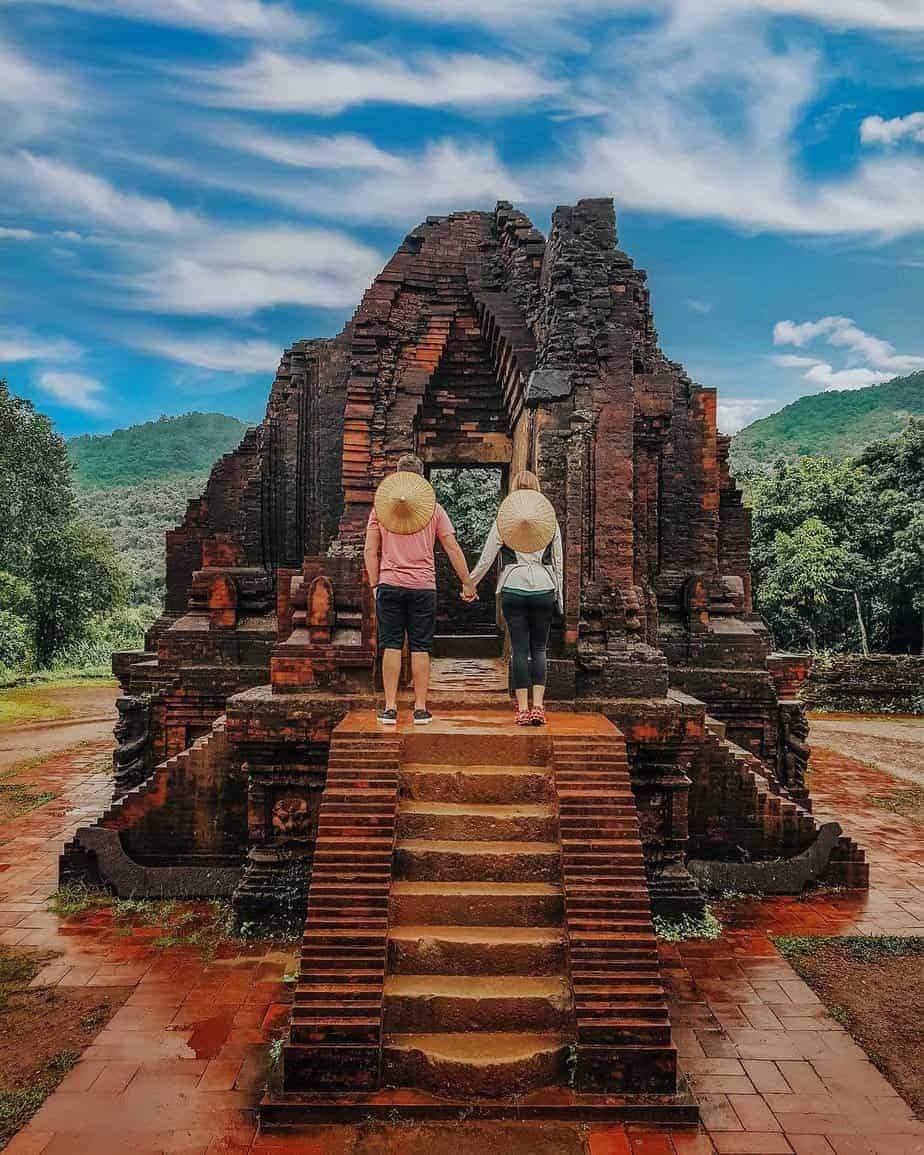 The cool and dry Hoi An weather is ideal for visiting My Son Sanctuary (Source: Collected)

Hoi An has not only historical architectural works but also many spectacular beaches. Among them, An Bang Beach and Cua Dai Beach are the two most notable beaches. Both these pristine beaches have smooth ivory sand strips. It is highly recommended to stroll along the beach early in the morning to see the sunrise, enjoy fresh air, and relax on the sand under the gentle sun. You can also play various water sports on the beach. 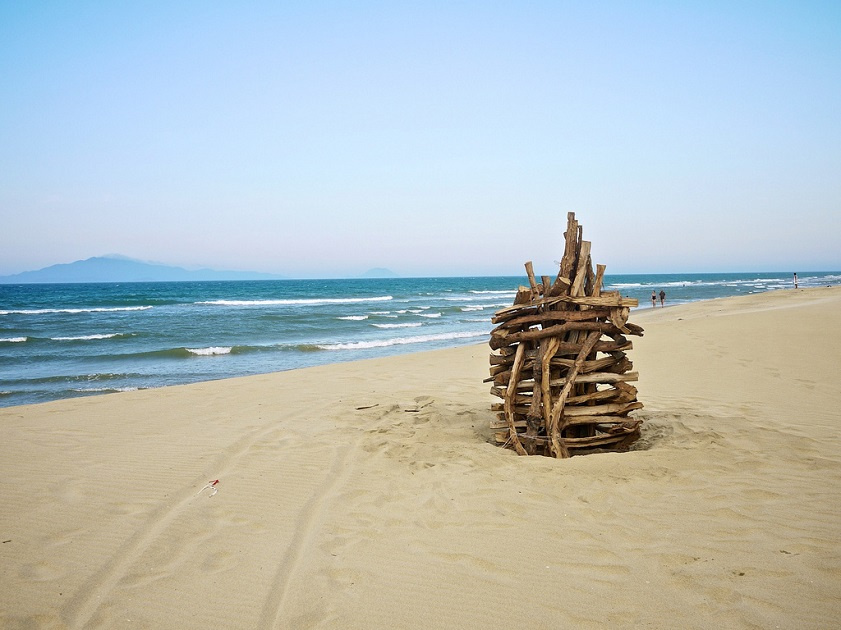 The local beaches are great attractions in the best month to visit Hoi An (Source: Collected)

Wandering round Hoi An at night, you will see many lively shopping areas with art performances and a variety of street foods with distinctive regional flavours. You can stop by Cong Nu Ngoc Hoa Night Market, Nguyen Hoang Night Market, or numerous other well-known markets on some bustling streets like Bach Dang, Tran Quy Cap, Tieu La, and Hoang Van Thu Streets. Tra Que Vegetable Village in the outskirts of Hoi An used to grow fragrant vegetables like basil. In the 18th century, a king heard about a strange vegetable that had a pungent taste like basil and a pleasant aroma like camellia at this village, so he changed its name to Tra Que (which means Basil Tea in Vietnamese). Now, the village still maintains the traditional method of growing organic vegetables. It only grows spices, such as onion, basil, perilla, cilantro, etc. Cycling to the vegetable village will be great while the weather in Hoi An is nice (Source: Collected)

>>> Book voucher, combo, tour to Hoi An to travel with convenience and optimize your budget during the peak tourist season in Hoi An!

3. The full guide for a trip to Hoi An in the rainy season

From September to January, Hoi An weather enters the rainy season. There are strong winds, low temperatures, frequent rains, and rising tides. There may be storm warnings from mid-October to mid-December. Although the weather may seem unfavourable, Hoi An ancient town still has a unique romantic charm in the rainy season.

VinWonders Nam Hoi An is a world-class amusement park located about 17 kilometres away from Hoi An city centre. Here, visitors will see the grandeur and modernity of this immense world of cultural heritage and entertainment. With an extremely large scale, the park has 5 large subdivisions, namely Harbor Corner, Island of Folk Culture, River Safari, Adventure Land, and Water World, with many indoor and outdoor games. With VinWonders Nam Hoi An, every time is best time to travel to Hoi An Vietnam

>>> Book tickets of VinWonders Nam Hoi An to enjoy endless fun no matter how the weather in Hoi An is!

Cantonese Assembly Hall, built in the late 19th century, used to be the place of meeting, exchange, and gathering of Chinese people in Hoi An. Many precious historical documents and artifacts are still preserved here, although there are no longer any cultural and religious activities organised. You can visit Cantonese Assembly Hall either when the weather in Hoi An is bright or gloomy (Source: Collected)

Built in 1741, this old house is a combination of Chinese, Japanese, and Vietnamese architectural styles. It has been recognised as a National Historical and Cultural Relic of Vietnam and a world culture heritage by UNESCO. Now, the owners still live upstairs while visitors can look around on the first floor. You can visit Tan Ky Old House no matter how the weather in Hoi An is (Source: Collected)

Quan Cong Temple was built in 1653 by the Chinese people in Hoi An ancient town. It worships Guan Yu (162-220), a talented general of the Three Kingdoms period in China. The temple has undergone 6 restorations over hundreds of years, the most recent one done in 1966.

Quan Cong Temple is a popular historical destination in Hoi An (Source: Collected)

Phuc Kien Assembly Hall, or the Assembly Hall of the Fujian Chinese Congregation, is a place to worship Mazu, Avalokitesvara Bodhisattva and other deities of sea, wealth, and childbearing. The assembly hall was built in 1697 by the Chinese people who migrated to Hoi An, resulting in its unique Chinese architecture. You can visit this Chinese architectural work in any Hoi An weather (Source: Collected)

3.2. Some tips for the most comfortable trip Hoi An weather in October makes the town even more tranquil and romantic (Source: Collected)

>>> Book tickets of VinWonders Nam Hoi An to enjoy the rainy season in the ancient town!

Hoi An weather will no longer matter if you have made the necessary preparations. In the dry season, you can go swimming or visit relic sites. In the rainy season, you can learn about the traditional culture and play many fun games at the exhilarating VinWonders Nam Hoi An amusement park.

>>> Book tickets of VinWonders Nam Hoi An to enjoy endless fun while you are in Hoi An no matter what the season is!

>>> Book voucher, combo, tour to Hoi An to optimize your budget and time!

Things to do in Da Nang: A comprehensive guide for your perfect getaway

Hoi An things to do: Make your journey in 2022 full of excitement

Da Nang in Vietnam 2023: Save the BEST guide for your forthcoming trip